Boon Island Light is located on the 300-by-700-foot (91 m × 213 m) Boon Island off the southern coast of Maine, United States, near Cape Neddick. Boon Island Light has the distinction of being the tallest lighthouse in both Maine and New England at 133 feet (41 m). The lighthouse has a focal plane at 137 feet (42 m) above mean high water. The light's beacon flashes white every 5 seconds.

As Boon Island is a very flat piece of land, well surrounded by ledges, the tower appears at times to be springing up from the sea from a submerged ledge, especially when low clouds are flying. One of the most isolated stations off the Maine coast, it is also one of the most dangerous.

No mention of haunted lighthouses would be complete without Boon Island. Although it's in far southern Maine, and not one of my local lights, it's still worth mentioning, because of the horrors that have occurred on the island. It is most famous for the wreck of the Nottingham Galley, which crashed into the island in December of 1710. Some of the crew survived by cannibalism, eating the flesh of their dead shipmates before they were rescued by fishermen.

One story is told of how the keepers were once marooned on the island for several weeks because of storms and rough weather. Their food supplies were low and starvation seemed to be staring them in the face. Just at the point of desperation a boat appeared and they signaled for help. The keeper’s message in a bottle was picked up by the passing schooner which hove to and anchored until the sea went down. Then the crew packed some food in a mackerel barrel and set it afloat. It drifted right into a little cove on the island and then the sea caught it and bounced it well up on the bank, out of the way of the surf. The hunger of the keepers was appeased until they were able to go ashore and get supplies at the village of York.

Local legends persist of an ethereal young woman shrouded in white who is seen on the rocks at dusk, who is said to be the spirit of Katherine Bright, who came to the 400 square yards of rock as a newlywed with her lightkeeper husband. A mere four months after arriving, a surge tide from a winter storm swept the island, and while trying to secure the island's boat, the keeper slipped on the rocks and drowned. Katherine somehow managed to pull his body ashore and dragged it to the lighthouse. She left his body at the foot of the stairs, and took over lighthouse duties for five days and nights, without eating or sleeping. On the sixth day, the light was out. Fishermen from York investigated, as the storm was over now, and found Mrs. Bright sitting on the stairs holding the frozen corpse of her husband. She and her husband's corpse were taken ashore, but by that time she'd completely lost her mind. She died only a few weeks after being rescued. It is said that her screeches can still be heard along with her apparition.

This lighthouse decoration is a quaint little model of the original. Serving as a perfect compliment to any room’s beach décor theme, this Boone Island Lighthouse is perfect for shell-collectors or beach-lovers alike, and will make a great conversation piece as you share your knowledge of this lighthouse's  historical legends. 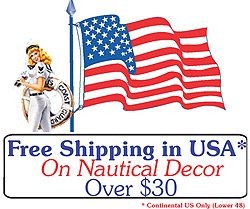 The Ocracoke lighthouse was built in 1823 by Noah Porter. It has been claimed that it is the second ..

On December 1, 1875, the Currituck Beach Light was completed, located between Cape Henry Light&..

Being completed in 1958, the Oak Island Lighthouse is one of the newest lighthouses in the..