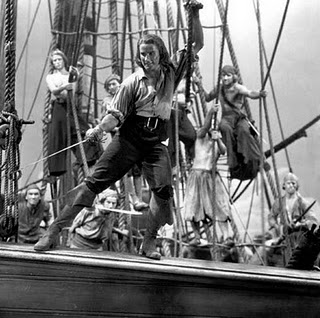 Most people are familiar with the Hollywood image of the swashbuckling pirate/privateer, dressed in a loose fitting flowing shirt, head bandana, sash, and trousers.

But by the time modern film and media came to reflect on the subject, the reality of life at sea from the late 16th to the early 19th century had long passed from human memory.

Some of the earliest descriptions of a seamans' dress appears to date from a few years after the Roman invasion of Britain (55 bc) with an order that the sails of longboats in the Roman fleet were to be dyed light-blue to match the colour of the sea and that their crew were to wear clothing of the same colour to lessen the chances of the boats being seen by an enemy or hit by archers.

Sea-fairing crews for King Edward the confessor, reigning from 1042 to 1066, were blue tunics. During the Norman invasion, of Britain in 1066, blue was the common colour amongst ships members.

Generally, Sailors’ clothes were completely practical, except for the outfits they donned for going ashore. These clothes were either supplied by the ship, or made from raw materials that the men purchased on board. Most worked barefoot, for extra grip on the ropes while aloft. Most mariners were accomplished sewers – a skill learned from mending sails, and could mend or craft garments, and embellish shirts with embroidery.

Early British seafarers had no common dress because the majority of ships that composed of the "Navie Royall" were not keep in permanent commission and were hired on an "as-needed" basis. One of the earliest descriptions of the general cut of the clothing worn, is given by Geoffrey Chaucer, of his ‘shipman’ in the Canterbury Tales. Who he describes as being dressed ‘all in a gowne of falding to the knee’. Some fifteenth-century sources depict sailors clad in hooded gowns with wide sleeves that reached to their elbows. The slitted hems made it easier to work aloft.

This gives the earliest date of about 1380 for this knee-length gown, possibly the forerunner of the English seaman's petticoat-trousers, which remained an article standard dress until the beginning of the 19th century. There was a good functional reason for the longevity of this odd piece of maritime clothing in the protection it offered to the trousers of men working aloft on the yards of square-rigged ships, and also when rowing in the boats of the fleet, where the petticoat protected against rain and spray. As time passed the ‘shipman's’ gown became a canvas frock tucked into breeches or trousers to form a blouse.

There was no standing navy until the reign of Henry the VII, where he recognized the Navy as an important seperate governmental department. Henry is said to have outfitted his captains' in white jackets with a red cross on the breast, and the seaman wore leather jerkins or doublets, and breeches.

One of Henry the VIII ships, the Mary Rose sank in the summer of 1545. Marine archaeologists have sifted through the wreckage and found more than 655 artifacts that once belonged to the sailors, officers, and passengers at the time. These provide a glimpse of what Tudor men, mariners in particular, wore.

The typical male dress of this period comprised a hat, linen shirt, jerkin, breeches, hose, and shoes. All of these have been recovered. The most prevalent foot coverings were either slip-on shoes or ankle boots. Some jerkins had buttons for closures; others had holes for lacing, although the laces didn’t survive.

During the late 16th century, elaborately illustrated title pages and cartouches with which the early chartmakers decorated their "sea atlases" provide much evidence about the contemporary dress of seamen during this time. Those of the late 16th and early 17th centuries are virtually unanimous in showing seamen wearing very baggy breeches with woollen stockings, a thigh-length blouse or coat, and a tall, hairy hat, although one or two of the Dutch sea atlases show some of their seamen wearing long baggy trousers under an ankle-length coat. It appears that stripes have also been long associated with mariners. By the middle of the 1600s, sailors appearing in English and Dutch paintings, wear red and white, or blue and white, horizontally striped shirts

However, from the 16th century onwards, the era of "discovery" increased the length of voyages, so there was a tendency for the dress of ships' crews to be similar in cut and colour. This was done "to avoyde the nastie beastlyness by diseases and unwholesome ill smells in every ship." This was true of both naval and merchant ships.

Mariners' were dressed from the slop chest. The term 'SLOPS' comes from an Old English word sloppe or slyppe, which in Chaucer's time, referred to a loose garment such as a smock, baggy trousers, or other type of breeches. The word sloppr, was also used by Vikings, and had a smiliar meaning. It later developed into a sort of unofficial uniform when the original clothing, in which men joined their ships, wore out. If only for economic reasons, the clothes tended to be all of the same pattern and colour.

Slops were first officially issued in the Royal Navy in 1623 and were sold by pursers, who were allowed one shilling in the pound commission, and who opened their slop chests before the mast on certain days. Samuel Pepys' diary and letters inform us how the pursers of the time supplied the men with slops, ‘wherein the seaman is much abused by the purser’, and in The British Fleet, by CN Robinson, considerable detail on this subject is given.