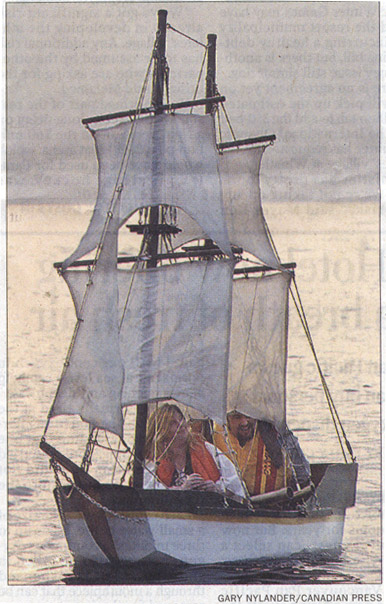 The purpose of the mini-brig project is to provide an inexpensive, fun, and feasible means of sailing a small scale square rigger, and engage in mock naval combat. In addition, a small size would make the vessel easily transportable to inland lakes and festivals.

The need for something small, portable and inexpensive had to be critical in the design. It was also imporant that it was a functional sailboat, complete with a traditional square rig.

As a Sea Scout in Richmond, I remembered a group that had a small fleet of mini "tall ships" based on a Sabot design. The ships were about 8ft in length and used to frequent the Vancouver Sea Festival. They had black powder cannons (basically a copper tube) and even a small sea-monster that would "attack" only to be repulsed by the gallant fleet. They were known as Sabot brigantines and was originally the creation of Les Alfreds of the Jibset sailing school and were operated by the Vancouver Small Ship Society. In the mid-1990's the Vancouver Sea Festival met it's demise and with it, the Brigantines disappeared.

A good article was written by one of the surviving members about the Sabot Brigantines appeared in Duckworks Magazine in April, 2005.

When this project began in 2004, there were no extant plans and as a result, the mini brigantine/galleon had to be designed from scratch, complete with sails, rigging and cannon. The following information contains plans to build such a vessel, and four miniature carbide cannons. The first mini-brig built using this design was the "Adventure" which launched in May, 2005.

The estimated construction costs are about $500 CDN / $400 U.S. per vessel and can be finished over several weekends. Each Shady Isle Mini-Brig is capable of carrying two adults.

The first mini-brig of this design was launched in time for the Kelowna, B.C. centennial celebration, on a cold rainy night, in May 2005. It successfully navigated Okanagan Lake, and sailed for the first time (even though the pintels for the rudder had not arrived) - it was powered by the small electric motor.

Later that year, we were invited to the 2005 Rusty Scupper Pirate Daze in Westport Washington, to battle the "short ships" name Ariel and Anne-Marie that were replicas of the HMS Barbados, that had been designed and sailed by Wayne Tedder. This was the first time in the ocean, and it meant trailering the brigs some 1,000 miles (round-trip) from the Okanagan. The mini-brig Adventure successfully made the journey. It was quickly learned the high-winds and tides meant some changes were necessary in the power and rigging design. Small modifications were made and she has been reappearing ever since, making it's 10th appearance at the festival in 2017.

A sister ship, the Liberte, was completed in 2007, and was featured with the Adventure, and in an article in No Quarter Given Magazine, in 2008.

The arrival of the Adventure in Westport, W.A. encouraged several locals to develop their own version of the mini-brig.

Our version of the  "Pram-style" mini-brig has made appearances in countless different festivals over the years, and many modifications have been made. These are the original plans, from which the Adventure was built in 2005.

We offer the plans for a nominal fee of $24.95 that gives a license to build one hull. The plans are provided on an "as-is" basis. You can download the plans by accessing our webstore at:

We currently operate on a non-profit basis. That is, any proceeds from the distribution of these plans are put back into the operation of these vessels and to charitable organizations. It will help facilitate the building of these small ships, and allow us to distribute these plans to others, to put on demonstrations, meets and other events. We welcome any input you may have as to furthering the design, and would gladly add any pictures of your brigs to a brig registry, so others can see your creations..

By building one Mini-Brig using the methods/plans contained herein, you agree to hold harmless the author for any damages caused by the use and/or misuse of the device/boat. There are no warranties expressed or implied that this boat is fit for any purpose. THESE PLANS MAY CONTAIN ERRORS.

By proceeding to build such a boat you do so at your own risk.

The author/designer Brian Nix limits the use of the plans for personal uses only. One hull per plan set.  Any commercial reproduction or mass production is strictly prohibited.

Please make sure to give credit where credit is due. Alot of hardwork and dedication has been put into these brigs over the years, and we have provided these plans for your own personal enjoyment.

We ask that you please reference that the design came from Brian Nix of the Shady Isle Pirates when asked.