Jean De Ango, or Jean D'Ango was a native of Dieppe, born about 1480, his father was a man of small means and engaged in merchant seamanship. Jean D'Ango took over his father's business, and ventured into the spice trade with Africa and India. In doing this, he was one of the first French corsairs to challenge the monopoly of Spain and Portugal. He also helped found a small company in France, known as, "The Compagnie des Indes Orientales" or East India Company, which later became a series of companies in various countries, such as the English East India Co., and the famous Dutch East India Co. Jean D'Ango was often referred to as the "Medici of Dieppe"; the boldness of his enterprises, the energy and independence of his character, the splendour of his luxury and expenditure, his ardent and elightened passion for art have shed around him a brilliant lustre which seems to rival that of his King, and friend, Francois I.

He eventually controlled a fleet of about 70 ships. In his early years, Jean De Ango, flirted on the verge of piracy, and the early accounts of his exploits seem to be difficult to trace for this reason, as the French have tried to convey a positive image. There are however some incidents that have remained recorded. For instance, at the end of March 1514, Jean Ango, together with Richard Heron, Christopher Price and Mathieu Doublet, equipped a Norman ship which was captained by a certain Jacques Maheut.

In April, the Norman ship was on the coast of Zeeland. It met a ship from Lübeck, a free-city, on the coast of Germany that was known as, "the Queen of the Hanseatic League". The ship, loaded with corn, rye and beer was seized by Ango's corsairs and led to Dieppe. The captain of the captured ship, Mathieu Cosse, made a claim in front of Chiffreville Jehan, the Lieutenant admiral in Dieppe, and alleged in his defense that the Lübeck ship had already paid taxes (customs excise) to France for the goods. His appeal succeeded and the confiscated goods were estimated and and a fine was imposed. It is interesting because coinage or money in the 16th century was usually known by its picture or some other visual characteristic, and not its monetary value. It did not have an actual value printed on it, as we commonly do today. The basic unit of coinage in France at this time was the or "écu d'or" or more commonly "Gold Crown". It's value relative to the money of account has fluctuated throughout the century, and was struck by Louis XI (1461-1483) to Francis I (1515-1547). The account describes that Jean D'Ango was charged a fine of twenty gold crowns (écus d'or), Christopher Price, twenty gold lions (lyons d'or), Doublet and Heron were charged with ten and four gold crowns with an image of a sun(écus d'or au soleil)respectively, and one coin with a crowned shield (écu couronné) each. It could be assumed that monetarily these coins are in decreasing values. 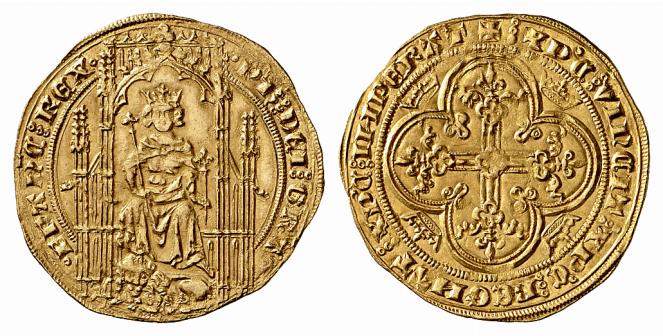 The Golden Lion is a coin with the image of a gold lion at the feet of the king of France seated. The first gold lions were first issued in 1338 under the reign of Philip VI. Other coins, minted in Flanders and Brabant in the fifteenth century are also called "Golden Lion". 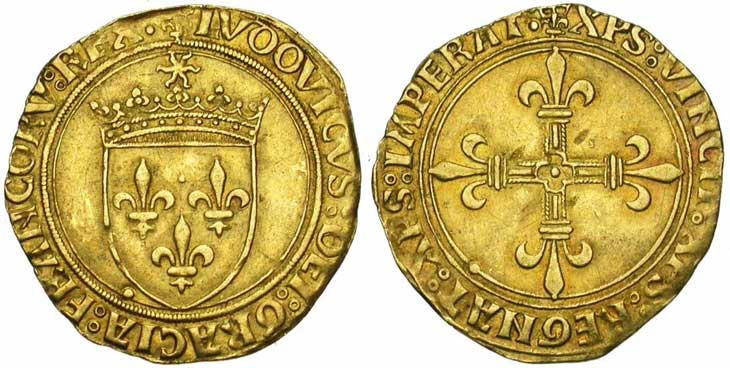 The  first minting of the Gold crown began in 1336. It was called so becasue it depicted the kings shield. Its value relative to the money of account has fluctuated throughout the century, and was struck by Louis XI (1461-1483) to Francis I (1515-1547).

In 1531, after John III of Portugal had confiscated one of his ships, D'Ango got the French king's permission to respond. With a letter of marque, he harassed the Portuguese fleet in the Atlantic, and even threatened to block the port of Lisbon. The Portuguese king finally agreed to pay reparations.

Ango was an intimate friend of king Francis I. In 1521 he was styled Viscount of Dieppe, and in 1533, after the king had visited him in his mansion in Normandy, captain of Dieppe.

Jean d'Sngo controlled a fleet of privateers, most notably, in 1524 he equipped the Dauphine, in which Giovanni da Verrazzano explored the east coast of North America and discovered the site of what is now New York City. Also, Jean and Raoul Parmentier in 1529 reached the coast of Sumatra in two of Ango’s ships, the Pensée and the Sacre.

When John III of Portugal confiscated one of his ships which carried plunder from captured vessels, Ango received the French king's permission to respond. Acting under a letter of marque issued on 26 July 1530, he harassed the Portuguese fleet in the Atlantic, and even threatened to block the port of Lisbon. On 15 August 1531, the Portuguese king agreed to pay reparations of 60,000 ducats in return for Ango's agreement to stop his actions and surrender the letter of marque.

In 1537, Jean d'Ango's fleets captured nine ships carrying silver from Peru. These hauls were taken near the Azores. But their extraordinary richness encouraged French captains to invade the Caribbean itself during the 1530s.

Between the years of 1535 and 1547, some sixty-six Spanish ships were captured by French corsairs. On the king’s death, Ango became a victim of rivals and was imprisoned by the reigning French monach, King Henry II Of France for a time in 1549 on a charge of official misconduct, by failing to pay taxes on proceeds from privateering exploits.

Jean D'Ango, passed away of natural death in 1551, rich and respected in Dieppe, where he left to bourgeois descendants a castle in Normandy