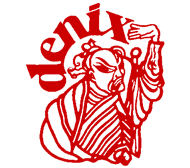 Denix started in 1966, based on the idea of the two founding partners: José Carterro and Sebastián Llull, both had experience in the jewellery sector and their knowledge, tenacity and enthusiasm, built the company from scratch.Crafted in Spain at their plant in Ciutadella de Menorca, Denix produces some of the world's best quality reproduction fire arms and weapons.

Denix brand is highly known and valued among customers, both for the quality of the replicas and wide variety of historically accurate designs. Denix uses mainly wood and metal to produce affordable good quality replicas that are the appropriate weight and specifications of the originals. These replicas do not fire (although the barrels and triggers move), they are meant for costume play/collecting/LARP only.

This Brass Flintlock Pistol features a unique three-barrel design and is a replica of a gun made by ..

This flintlock pirate pistol modeled from the 1700's has a stock made from European hardwood and a u..

George Washington's favorite pistol was made in London in 1748 by Hawkins, one of the best known gun..

This is a  highly quality detailed replica of a double-barreled turn-over flintlock pistol made..

This little pocket flintlock replica is inspired by a model from gunsmith Joseph Griffen circa 1798...

The year IX or "The Pistolet modèle An IX﻿" was a flintlock cavalry pistol in service in French unit..

This Pirate / Huguenot pistol is modeled after the Year XIII (13) pattern flintlock pistol. Known as..

Napoleons personal flintlock pistol was made in 1806 by Jean-Baptiste Gribeauval of St. Etienne, Nap..

This is a fine replica of the French Navy version of  the Year XIII (13) pattern flintlock pist..

The blunderbuss is a muzzle-loading firearm with a short, large-caliber barrel, which is flared at t..

In the late 18th century, Charing Cross in London was a hub of gunsmithing activity. This included J..

This set resembles flintlocks manufactured in England during the mid 1700's. It may be said that the..

The style of this pistol reflects both, Oriental and European influences and features a unique Mique..