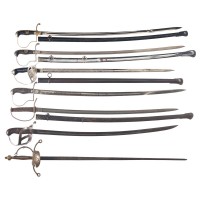 History of the Sword

Historically, the sword developed in the Bronze Age, evolving from the dagger; the earliest specimens date to 1600 BC. The Iron Age sword remained fairly short and without a crossguard. The "spatha" as it developed in the Late Roman army became the predecessor of the European sword of the Middle Ages, at first adopted as the Migration period sword, and only in the High Middle Ages developed into the classical arming sword with crossguard. The word sword continues  from Old English word "sweord".

Prior to the 19th century, the landsman usually carried one of a different number of type a swords, including longswords, broadswords, short swords, and rapiers. However, the sailor primarily carried a cutlass.

Although also used on land, the cutlass is best known as the sailor's weapon of choice. A naval side-arm, its popularity was likely because it was not only robust enough to hack through heavy ropes, canvas, and wood, but short enough to use in relatively close quarters, such as during boarding actions, in the rigging, or below decks. Another advantage to the cutlass was its simplicity of use. Employing it effectively required less training than that required to master a rapier or small sword, and it was more effective as a close-combat weapon than a full-sized sword would be on a cramped ship.

Cutlasses are famous for being used by pirates, although there is no reason to believe that Caribbean buccaneers invented them, as has sometimes been claimed. However, the subsequent use of cutlasses by pirates is well documented in contemporary sources, notably by the pirate crews of William Fly, William Kidd, Blackbeard and Stede Bonnet.

French historian Alexandre Exquemelin reports the buccaneer Francois l'Ollonais using a cutlass as early as 1667. Pirates used these weapons for intimidation as much as for combat, often needing no more than to grip their hilts to induce a crew to surrender, or beating captives with the flat of the blade to force their compliance or responsiveness to interrogation.

Owing to its versatility, the cutlass was as often an agricultural implement and tool as it was as a weapon (cf. machete, to which the same comment applies), being used commonly in rain forest and sugar cane areas, such as the Caribbean and Central America. In their most simplified form they are held to have become the machete of the Caribbean.

This is a replica of the 19th century-style pirate cutlass patterned after the 1833 French Navy boar..

Ihis style of sword is patterned after the 1833 French Navy boarding cutlass. This weapon was a favo..

This cutlass produced by Mastery Cutlery, is inspired by the movie Pirates of the Caribbean. It feat..

This axe is inspired by the weapon favored by Ragnar Lothbrok, this type of axe was essential in Rag..

The Sword of Kings is a relic held by the reigning Viking king during the time of Ragnar Lothbrok. ..

The quintessential pirate sabre like those carried by the infamous Pirates Of The Caribbean. Aye! Ja..